How your language can get you better results 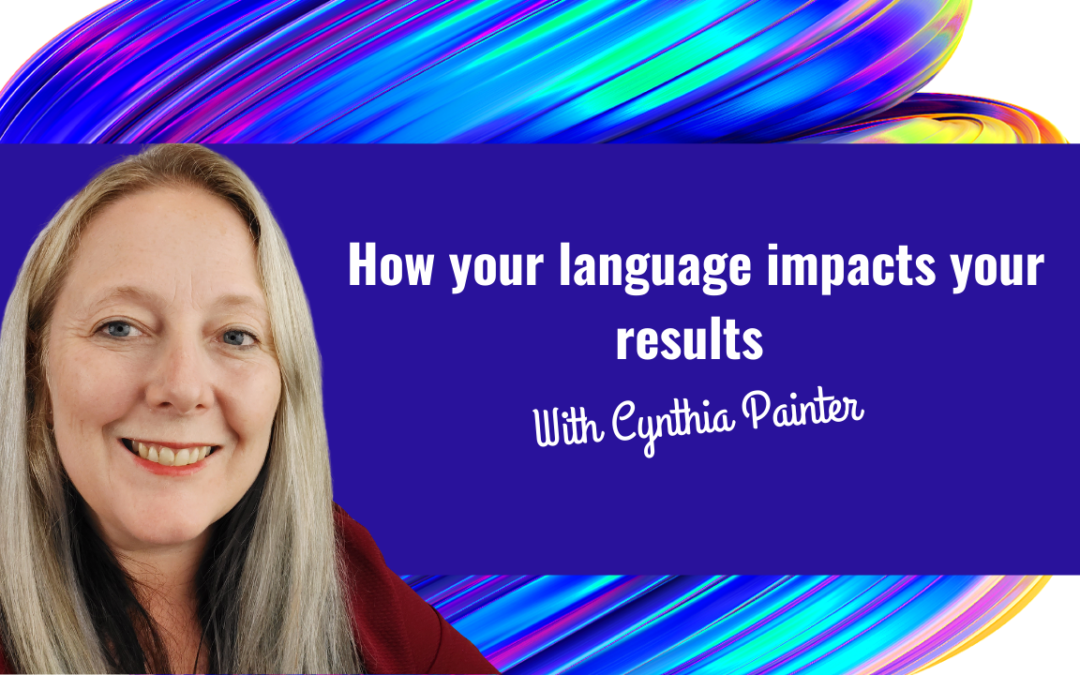 In my recent YouTube video I talked about language and how it can significantly impact your results. How would you like to get better results by making a pretty simple change and that is through your language? Our language is a very powerful indicator of whether we succeed or we fail. Let us explore this.

How does language and the use of language impact our results?

The unconscious mind doesn’t really take negatives really well. If we say to a child “don’t run”, what do they do? They run. Are you saying things the way you want them? You really need to say it the way you want it. Instead of saying “don’t run” you would say “walk”. Instead of saying to yourself “don’t forget your paperwork”, “remember your paperwork”. If you say to yourself “I can’t do” something your brain will believe you.

You’ve probably stood in front of the pantry or the cupboard before and someone says to you “go and get the sauce that’s in the cupboard”. You are standing in front of the cupboard and saying “I can’t see it, I can’t see it”. Your brain will go with you and you won’t be able to see. They come up and say “here it is it was right in front of you”. The things that you are saying out loud and the things that you think are like a direct instruction.  Watch those negatives because they can get in the way of your desired results. Say it the way you want it.

What are you actually saying to yourself?

Here is an example of language at play.

My younger son who has recently started doing swimming competitions had a swimming carnival at school. In our family we say you have to do at least one race.

He decides to do the 50 meter free style. He hasn’t really done 50 metres before in one go. We were practicing in the lead up to the race. He did it once. But when he went to practice again he started stopping and starting.

We looked at technique and breathing. But then it dawned on me and I asked him: what are you saying to yourself in that moment? What are you imagining? And for him it was that he was going to run out of breath.

We worked on both of those, changed the language and we gave him something different to say to himself. We gave him the strategy that he can take as many breaths as he likes. He could take his time. However the language in his head was that it was going to be hard.

So instead of saying to himself “oh my God this is hard, I’m going to run out of breath” as he was swimming we gave him something else to say which is what do you want it to be? He says, ”I want this to be easy”. So nice and easy became his mantra.  We gave him new language to use. Now this was something he was using as a pattern interrupt whilst he was swimming.

Could I have worked with him on self-limiting beliefs that were underneath that? For sure. But to get him through the swimming race we did a pattern interrupt, placed it and challenged his thinking and as he was swimming it became “going nice and easy”.

How can language work in your favour?

Think about this: where has your language gotten in the way of results that you want as we come into hard times?  Are you saying to yourself “my goodness my business is going to fail or I’ve got no opportunities to speak anywhere”?  That puts you in a very un-resourceful state. We want you to be in a resourceful state so that you can then take advantage of changes and you can keep moving on.

Go and have a play with language. Start first with noticing the language you are using and then change it to say the way you want it and notice how things become a little easier. There will be more work to do underneath for mindset work but this is a great place to start.

I’d love for you to come and subscribe to the YouTube channel if you are watching this on social media please do comment and follow along. I’d love to hear how changing your language has gotten you better results. What was your old language? What is your new language? You can connect with me via my Facebook page, Create Action Now or drop me an email cynthia@createactionnow.com.au